Dr. Zemmel is a Board-Certified Plastic Surgeon and founder of Richmond Aesthetic Surgery.

Check out our latest reviews from Google, Facebook and Yelp

Factors in Determining Your Final Shape

Your final shape after breast augmentation surgery is in large part determined by your breast shape before surgery. In general you can expect your post-operative appearance of your newly augmented breast to be an enlarged, amplified form your original shape.

There are many factors the influence the shape of your preoperative appearance and your final shape. Some of these variables can be modified during surgery while others are permanent. Your final shape will be determined by:

Some of these variables can be altered with surgery, while some are permanent. Breast volume, width, and height as well and the level of the inframammary fold can often be modified. Factors such as width of the breast bone, which effects cleavage, curvature of the spine and the shape of the ribs cannot be modified.

The level of the inframammary fold (the crease where the lower portion of the breast meets the chest wall) and location of the nipples have a tremendous impact on the shape of the final breast implant result. The size and shape of the nipple and areola, loosening of the breast skin, and breast sagging may be modified by a breast lift (mastopexy) if needed. Volume and size differences of the breasts can be often corrected by adjusting the size of each implant. 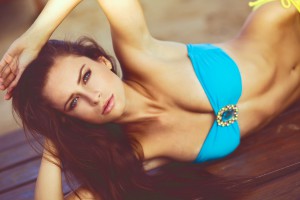 These anatomical factors vary greatly from patient to patient, and our breast surgeon, Dr. Neil J. Zemmel, will go over these issues in detail during your consultation.

As noted above, one of the most common complications of breast augmentation is the development of capsular contracture. This is a thickening and hardening of the thin capsule that forms around any permanent implant, including breast implants. The thickened capsule tries to contract the implant into the smallest volume possible (thereby minimizing surface tension). In greater than 95% of patients, the capsule remains thin and soft and undetectable by the patient. In a small minority of patients the reaction is more vigorous and the capsular thickens. Dr. Zemmel uses several ways to limit the amount of scar production before, during, and after surgery.

Dr. Zemmel will advise you on several methods to optimize your wound healing. If you are smoker you will quit smoking 4 to 6 weeks before surgery. Smoking reduces the amount of oxygen and nutrients delivered to the wound bed and severely inhibits wound healing.

Capsular contracture also may be influenced by the amount of contamination during surgery. This contamination is not significant enough to cause a robust infection, but serves as an irritant to the breast pocket causing contracture. Dr. Zemmel maintains the highest level of sterile technique in the operating room to reduce the amount of bacteria around the implant. It is also important to limit potential germ contamination during surgery by proper hygiene in the days before surgery. Dr. Zemmel will instruct you to take a thorough shower the evening before and morning of surgery using an antibacterial soap such as Dial. A betadine prep is done while you are prepared for breast augmentation surgery.

Finally, Dr. Zemmel instructs all patients to begin early, vigorous post-operative massage of the implants. He will instruct you on the time and course and technique of breast massage. Most patients begin breast massage 7 to 10 days after surgery as tolerated.

As discussed above, the original breast shape largely influences the final outcome in breast augmentation surgery. The volume, height, width, breast tissue and skin thickness, and position of the nipple and inframammary fold all influence final shape. Some women develop breasts that have a smaller, constricted lower pole (bottom half) of the breast called tubular breasts, tuberous breast or constricted breast deformity. These three names all denote the same condition.

Women with tubular breasts have many variations, but all share some common features:

If you believe you have tuberous breasts, Dr. Zemmel will be happy to see you for a consultation.